US Club Soccer’s Player Development Programs (PDPs) are regionally-based identification and developmental programs conducted within the id2 Program umbrella. PDPs are focused on the National Premier Leagues (NPL) and other top leagues in specific geographic areas.

CHARLESTON, S.C. (Sept. 29, 2022) – US Club Soccer is preparing its id2 Program to identify and develop the next generation of youth players with a full schedule of 2022-23 id2 programming. NPL member leagues and other top leagues will co-host one-day id2 Selection events in the fall and winter, supplemented by various Player Development Programs (PDP) and nationwide scouting. Those efforts lead to a pair of national id2 Training Camps in early 2023. The final element will be the highly acclaimed Id2 National Selection International Tour in April 2023, which returns after a two-year absence due to COVID precautions.

The id2 Program is a leader in player identification and development, as it provides opportunities for elite athletes to be identified, developed and scouted for inclusion in U.S. Soccer’s youth national team programming. The id2 Program is an Olympic Development Program approved by the United States Olympic Committee and the U.S. Soccer Federation. There is no cost for players to participate or be scouted, and all meals, lodging and gear are provided by US Club Soccer and Nike. This approach to eliminating barriers to entry helps ensure the best players are able to participate.

Here is the progression of id2 programming: 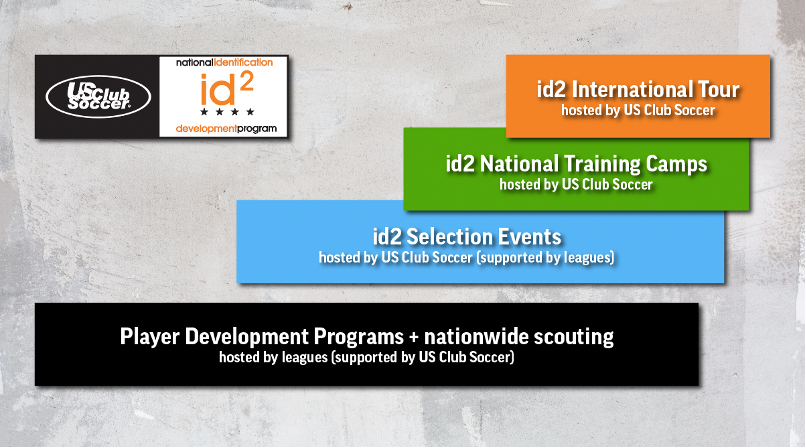 id2 Selection events begin in October, and they serve to scout players for id2 Training Camps. US Club Soccer is co-hosting with the following leagues:

The id2 Program is invitation-only. id2 directors Gerry McKeown (boys) and Tricia Taliaferro (girls) lead scouting efforts through a multi-faceted process that includes scouting competitions themselves, receiving recommendations from Directors of Coaching, and consulting with a network of trusted scouts and coaches throughout the country for player leads.

id2 Selection events are one-day programs that include scouted, tactical training sessions and an 11v11 match. Regional leagues – like the National Premier Leagues member leagues – throughout the country co-host these events with US Club Soccer to facilitate a more comfortable scouting and developmental experience for players. Top performers are then invited to participate in id2 Training Camps. Typically, 30 boys and 30 girls players participate in id2 Selection events.

id2 Training Camps are three-day regional identification and development camps, in which players – 30 boys and 30 girls – participate in a multi-faceted experience of training sessions and games, as well as off-the-field presentations and discussions. id2 directors lead the camps alongside a collection of top club coaches from around the country. Camps include carefully curated itineraries, balancing on-field training and scrimmages, classroom presentations, nutrition and recovery. Players receive evaluations from their camp coaches to help continue their developmental journeys in their club environments back home. id2 directors share player ratings and feedback with U.S. Soccer youth national team staff for potential invitations to future youth national team programming. Watch a “day in the life” of an id2 participant from a past training camp here.

The final programming element of each id2 cycle is the selection of id2 National Selection boys and girls teams. Selected players travel internationally to train with each other and compete against some of the world’s best academy teams. Numerous professional players are former id2 National Selection team members, including: Christian Pulisic, Lindsey Horan, Tim Weah, Catarina Macario and Jonathan Gonzalez. In addition to meals, lodging and gear being provided by US Club Soccer and Nike, travel for all players is also covered. View a previously released “all-time Best XI” of id2 boys alumni here. New Best XI selections will be released soon.